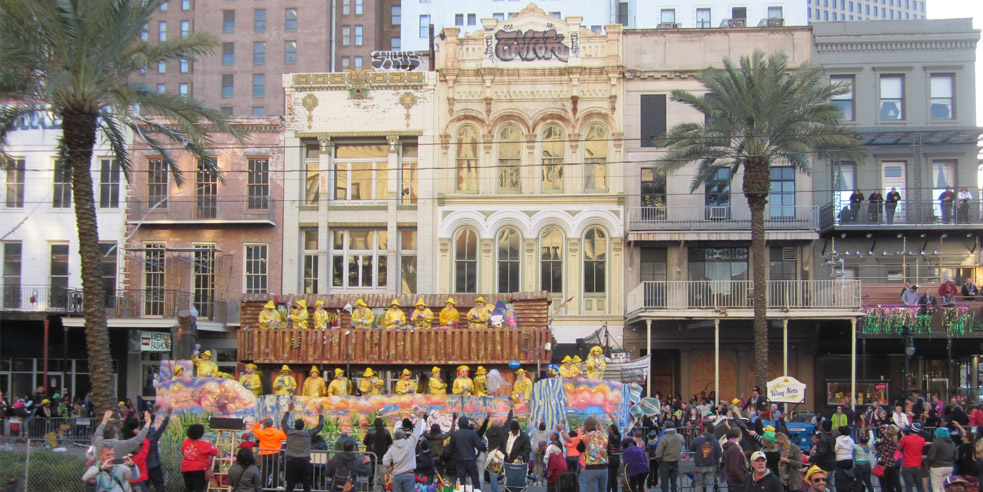 I lived in New Orleans for almost 20 years. In that time, I had a wide range of emotions about Mardi Gras. The first few years I lived in the city, I was in my early-to-mid 20’s and absolutely loved it. I went with friends to every parade I could and even braved the French Quarter a few times. It was a swirling sea of humanity and one of those things that everyone should experience at least once. It helped that there was plenty of alcohol involved.

One year, me, my roommate, his brothers and their girlfriends walked from our house Uptown down to the French Quarter while carrying a giant cooler. It’s about four miles, which may not seem like a lot, but when there are thousands of people along the route you’re walking and you have to stop every now and then to switch out people carrying the cooler… let’s just say we never tried anything like that again. But we still occasionally do the “remember when” thing and laugh about what dummies we were. The memory is better than the experience ever was.

By the time I had been to four or five Mardi Gras (side note: I’m not sure of the exact plural for Mardi Gras. Should it be Mardi Grases? I somehow doubt it. I’m going to stick with Mardi Gras as both the singular and the plural), I was pretty much over it. The parades are generally all the same (though fans of Mardi Gras seem aghast when you say that) and the dirty little secret is that all of the stuff that they throw off the floats is cheap, plastic crap that’s bought in bulk. Plus, the older I got, the more introverted I became… or at least the more in touch with my introverted side I became. Being in a crowd of that many people was just more than I wanted to deal with. So, I gave up on Mardi Gras for a few years. I think I went almost 10 years without going to a single parade. I left town during Mardi Gras a few times. And I didn’t really miss it.

A few years ago, I decided to give it another shot. Well, my cousin convinced me to give it another shot. She talked me into joining her and her two little girls to watch her husband (who is one of my most favorite people) ride in a parade. And it was fun. And I realized that, when you’re in your 30s and have embraced being “old,” you don’t have to do Mardi Gras like you’re in your 20s. We set up shop along the parade route almost as if we were tailgating: camp chairs, snacks, drinks. I realized I didn’t have to worry about catching (or at least keeping) the cheap, plastic crap. We make it an annual occurrence now complete with Popeye’s, and its one of the things I most look forward to every year.

But what I think really put me over the top of re-embracing Mardi Gras was actually riding in a parade. A friend from grad school got me involved with the Krewe of Thoth back in 2014 and I rode in 2014, 2015 and 2016. Riding in a parade might be the closest thing there is to being a rock star. You’re up on a float (which is basically like a moving stage), there’s music blasting and people are just yelling and screaming and generally going nuts for you. And, yes, I’ve had people flash for beads. Unfortunately, not really anyone I would have wanted to see flash but it does happen.

If you ever have a chance to ride in a parade, you should jump at it. It’s actually surprisingly easy to do – there are krewes that seem to always be looking for folks to ride. It’s costs a few hundred bucks and then you usually have to buy your own throws (another couple hundred bucks) but, if you’ve got the spare cash, it’s definitely worth doing.

And if you’ve never been to Mardi Gras, you should definitely go.

Or, put a better way, in the immortal words of Professor Longhair, “If you go to New Orleans, you ought to go see the Mardi Gras.”

But regardless of how you do it, everyone should experience Mardi Gras at least once.

What I’ve learned is that you can do Mardi Gras any way you want to do it. You can dive in and get smack in the middle of the crowds – go to Bourbon Street on Mardi Gras day and experience that swirling sea of humanity. Or you can do it family style – check out one of the Uptown parades that are earlier in the season (Mardi Gras is a season that lasts a couple of weeks, not just one day or even one weekend), where you can set up some camp chairs and just enjoy the sights and sounds as they pass you by.