The 2018 Jazz Fest lineup was announced today.1 And even though I enjoyed the announcement video, I was decidedly underwhelmed by the performer lineup as a whole.

The headliners appear to be Aerosmith, Aretha Franklin, Sting, Jimmy Buffett, Jack White, Beck and Lionel Ritchie with the next level of performers including the likes of David Byrne, Anita Baker, Bonnie Raitt, Jack Johnson and Sheryl Crow.2 A few of the other national-level performers I at least recognize are Smokey Robinson, Lyle Lovett, Aaron Neville, Buddy Guy, Jason Isbell, Old Crow Medicine Show and the Steve Miller Band. The rest of the lineup is the usual assortment of New Orleans-area artists and Jazz Fest mainstays like Big Freedia, Big Sam’s Funky Nation, Galactic and Rebirth Brass Band. 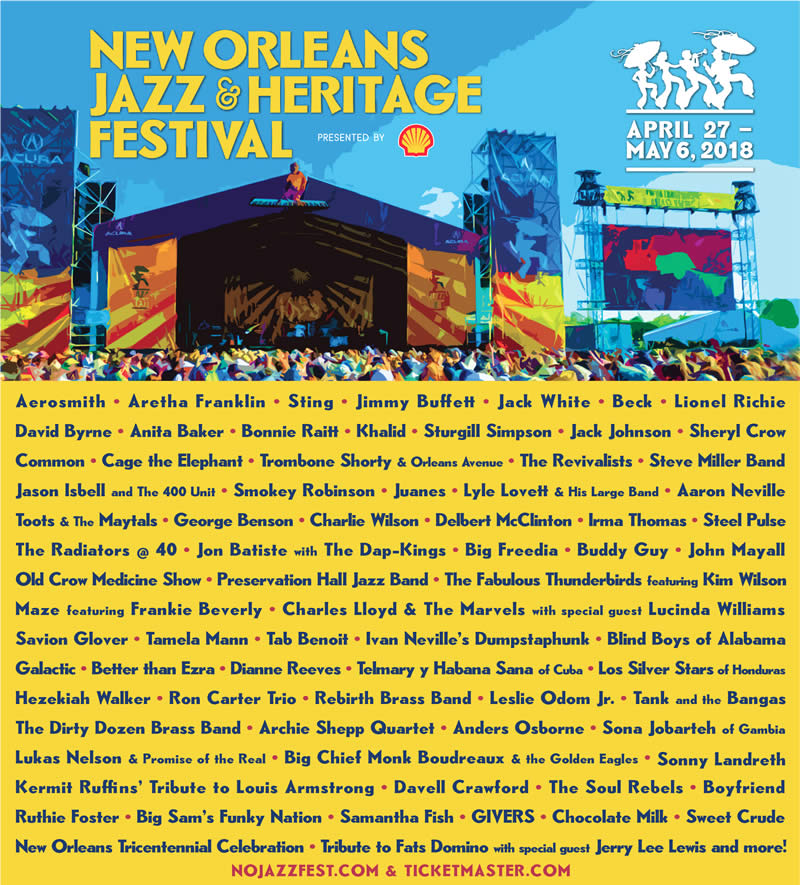 None of those artists are terrible but none of them are, at least to me, worth getting all that excited about. Especially given that single-day tickets are $65 in advance or $80 at the gate. I might get excited for that lineup at $30 a day but not at $65. And $80 if you decide last minute that you want to go out to Jazz Fest for the day? That’s just plan nuts.

There are a handful of folks I’d be interested in seeing, either because I’ve never seen them before (like Aerosmith, Aretha Franklin or David Byrne) or because I know they’ll put on a good show (like Lionel Richie, Jimmy Buffett or Sheryl Crow) but I don’t know that I’d be willing to shell out $65 to see any of them, even if it was a private show in my living room. If I still lived in New Orleans, the only way I’d probably do Jazz Fest this year is if I took advantage of Locals Day, where tickets are only $50. That day features acts like Lionel Richie, Old Crow Medicine Show, Kermit Ruffins and Big Sam’s Funky Nation. But even at $50 per ticket, I’d have to think long and hard before deciding to go.3

A big part of the issue is that it’s never just $65 for a ticket. It’s $65 plus a lot more when you factor in food and drinks. And since I usually like to be out there all day, and because the food is good, I end up eating several times. Plus, it’s hot out there and drinking lots of water is a must. It’s not out of the realm of possibility for me to spend another $40-50 on food and drinks in a single day. Multiply all that times two if my wife goes with me and you’re looking at upwards of $200 or more a day.4 And Jazz Fest is seven days long. When I was younger, there were multiple years that I went all seven days.

This year, if you want to go every day, and took advantage of the $50 Locals Day ticket, you’re looking at a minimum of $440 just for tickets (maybe even more once you factor in TicketMaster fees and the like). If you’re not a local but traveling in for Jazz Fest (which plenty of people do) and want to go all seven days, you’re looking at at least $455 just for tickets.

And I guess this is where I affect my old man voice and say “Back in my day, single day tickets to Jazz Fest were only $18.”

It’s all a little disheartening because I love Jazz Fest. When I lived in New Orleans, it was my thing. Any day I went, I’d get there early and set up a spot at the stage of the headliner I wanted to see.5 I had my own flag and my spot often served as a meeting spot for friends and family. I even figured out the best place to set up a spot at each of the two main stages so that my group ended up in the shade. From 1999 (the first full year I lived in New Orleans) to 2015 (the last full year I lived in New Orleans), I only went to Mardi Gras a handful of times. But during those 17 years. I only missed one Jazz Fest (2009) and only because there were extenuating circumstances.

But now, I’m not sure I could rationalize going more than one day. And even then only if there was someone I just really, really wanted to see. The only two groups that were always on my Must See list if they played Jazz Fest were the Allman Brothers and Widespread Panic. But, with Gregg Allman going on to his great reward, the Allman Brothers are no more. And, as much as I love them, I’ve already seen Widespread Panic upwards of 25-30 times in my life. Maybe more. So I’m not even sure who would be on my Must See list anymore. Maybe E.L.O., if Jeff Lynne were touring some sort of incarnation of that band. Maybe R.E.M., if they ever reunited. Maybe the Foo Fighters. But again, given what a single-day ticket costs, I’d have to really think about it.

Part of me understands that the whole increasing costs phenomenon has been happening for a number of years and that it’s all a “what the market will bear” kind of thing. I’ve certainly enjoyed the fruits of those increased costs: getting to see acts like Elton John and Tom Petty and Bruce Springsteen and Simon & Garfunkel, none of whom come cheap I would assume.

And I recognize that I’m probably in the minority. Maybe $65-80 per event is the new normal in the world of concerts/festivals. It almost has to be, because by almost any account, Jazz Fest isn’t hurting for attendance. But Jazz Fest not-hurting-for-attendance is another reason why I’m less inclined to shell out more money for tickets each year: Jazz Fest has grown increasingly crowded. Fights over space were not uncommon the last few years I went. My wife had her foot stomped on by a drunk who was staggering through the throngs of people. At times, it’s almost literally impossible to move through the crowds.

But even the drawbacks doesn’t stop it from being disappointing that I’m being squeezed out of something that I truly loved and looked forward to each year. I guess I’ll always love Jazz Fest. It’s just too bad that Jazz Fest has grown to love money more than it loves me.

1. Or, if you prefer to be a little more formal with your references, the 2018 New Orleans Jazz & Heritage Festival lineup was announced today.

2. At least those are the folks I recognize. I’m sure there are some other notables in the second tier that I just don’t recognize because I’m old.

4. And I’m not even factoring in parking, which is usually at least another $20 a day.