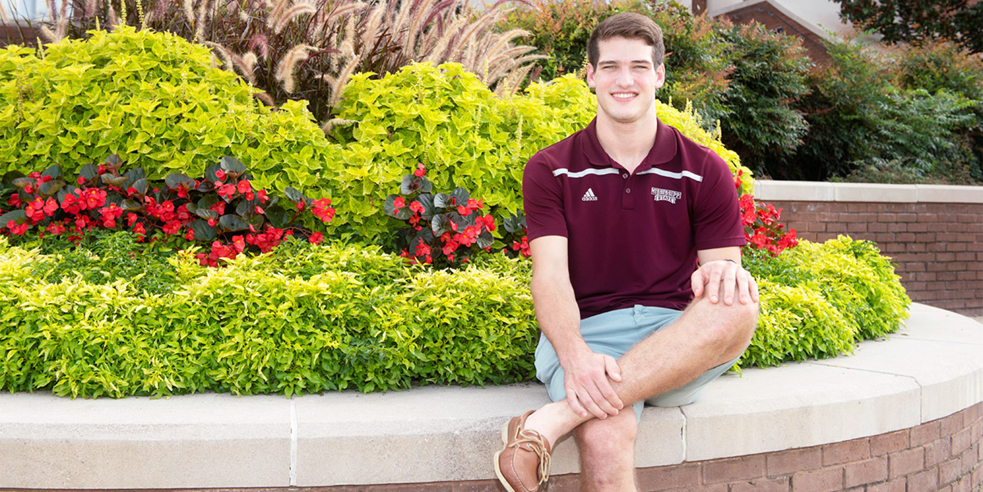 Here’s a profile of an engineering student that I wrote at work. It was nice to be able to write a short feature and not something I needed to spend days researching. Though I was disappointed not to be able to use my favorite thing that he said in the interview in the story:

“My parents didn’t raise any boomerang kids. You can’t when you have 12 kids – we don’t have a lot of space in the basement.”

You can also read it on the Mississippi State website. Photo credit goes to Beth Wynn from the MSU Office of Public Affairs.

Growing up as the youngest of 12 siblings, family has naturally had a strong influence on Ben Armour. And with a dad and several siblings who are engineers, it’s probably not all that surprising that the native of Laurel chose to enroll in Mississippi State’s Bagley College of Engineering.

“I wouldn’t be majoring in chemical engineering if it weren’t for my family,” Armour said. “Not because they pressured me to do it. It’s just easier to see the end goal when you have people around you who have been through it. It shows you what’s possible.”

A junior, Armour is in his first semester in the Dave C. Swalm School of Chemical Engineering after having attended Jones County Junior College last year. Before graduating from Jones, he, like his siblings before him, was homeschooled. While that might not be the traditional route for most students, Armour said it has worked to his advantage as he’s progressed through the ranks of higher education.

“I was able to dual-enroll and earn credits at Jones while I was still in high school,” Armour said. “I knew I was going to be studying engineering so I was able to spread my core classes, like calculus and physics and chemistry, out a little more and not take them all at the same time.”

Another benefit to homeschooling was its flexibility. Because he didn’t have to spend the entire day in a classroom, he was able to use part of the day to gain practical work experience and started his own lawn care business. He spent some time working for a utility company and also did some work with a construction company.

He said his parents made sure he learned a few important life skills as well.

“Working a lot kind of shaped my reality,” Armour added. “It helped my transition to college. I’m already used to handling my own finances. My parents raised us all to buy our own cars. They taught us to handle normal, everyday-life kinds of things. Once you get those down, the only other challenge is the school work.

“Engineering is certainly challenging but if you have a schedule and you stick to it, work hard and don’t get distracted, I think anyone can do it. You just have to be willing to study a lot to get through it. You have to be committed to doing the work.”

Thankfully, with a family as large as his, Armour always knows where to go when he needs advice, both about engineering and about life at MSU. He’s almost lost count of how many of his 11 siblings have attended Mississippi State.

“It’s almost easier to list the ones who didn’t go here,” he said with a laugh.

But even if he hadn’t had a long line of siblings attend Mississippi State, it’s likely he would have ended up in Starkville anyway.

“I pretty much always knew I was going to come to State,” Armour said. “If you’re going to study engineering, Mississippi State is definitely the best place to do it.”