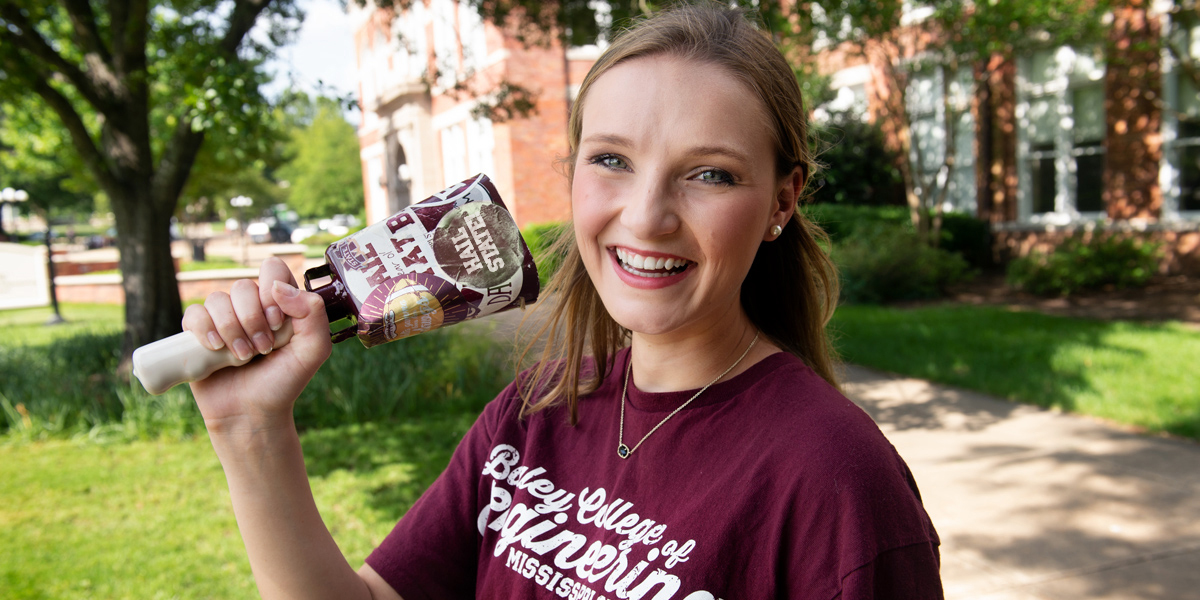 I wrote another student profile for the Mississippi State Our People section. It was, at 680-ish words, admittedly a little longer than their usual stories, which generally clock in at around 450-500 words. So they edited it down. And part of me understands but part of me was a bit disappointed because they cut out the path she took to become an engineering student – which, to me, is the primary point of the story.

So, you can read the abridged version here, on the Mississippi State website. But I also wanted to keep a copy of my original story, which you can read below.

Also, just for fun, here’s the one I wrote last year.

“Do you know what you’re going to major in?”

That simple phrase could very well be the question that incoming freshmen most often hear as they begin university life. For senior industrial engineering major Caroline Bearden, though, it took a few years and a few false starts before she was finally able to answer the question definitively.

“I’ve had four different majors over the past four years. And that doesn’t include the semesters that I was officially undeclared,” Bearden said.

A native of Hoover, Alabama, Bearden entered Mississippi State as a freshman in the fall of 2015. She initially majored in nutrition but it didn’t take her long to realize she wasn’t enjoying the classes. So after a semester of thinking through her options, she transitioned into biological sciences with a pre-med concentration to start her sophomore year.

“For a while, I thought I wanted to be a doctor. I’ve always been fascinated by biology and medicine,” she said. “But after working at the hospital for a semester and taking organic chemistry, I discovered pretty quickly that being a doctor wasn’t for me.”

While her first two majors had at least had a health and wellness theme in common, the next was perhaps the most random. She had always had an interest in the weather and had some friends already in the meteorology program, so she decided to give that a go to start her junior year. But that experience, too, was short-lived.

“At that point, I was about to start the second semester of my junior year and I was really unsure of what I wanted to do,” Bearden said. “I had done a good job of figuring out what I didn’t want to do but I hadn’t been able to figure out what I did want to do.”

At that point, Bearden’s mother suggested she look into engineering. So she talked with a family friend who is on the engineering faculty at UAB and realized it might be something she would enjoy.

“When I came back to school at the start of the spring, I walked into Dr. (Lesley) Strawderman’s office and said ‘I want to change my major to engineering’ and thankfully she didn’t look at me like I had two heads,” Bearden said. “She just said ‘Ok! Let’s figure out where you are and how to move forward.’”

Thankfully, most of her core classes were applicable to an engineering degree. Once enrolled in industrial engineering, Bearden jumped in with both feet. She joined MSU’s Institute of Industrial & Systems Engineering student chapter and serves as that organization’s treasurer. And she’s already taken advantage of the Bagley College of Engineering internship program to spend two summers interning with Fed Ex in Memphis.

She was also able to join a research project that looks at how athletes and coaches can better use the data from wearable technology to structure practices.

“I’ve been working with the soccer team here, looking at the data they get from their wearable devices,” Bearden said. “My goal is to help explain the data to coaches who don’t necessarily have a lot of time to pour over the numbers. Hopefully we can use the data to help them determine how in shape their players are, how hard they’re working during practices and how those things affect how they perform in a game.”

Coming to engineering late in her collegiate career has obviously been an adjustment but, with the help of the industrial & systems engineering faculty, it’s one that Bearden has taken in stride.

“Engineering has really challenged me, more so than any other major,” Bearden said. “It’s made me think in a different way. Everyone in ISE has been extremely helpful and they’ve really made this whole experience a lot better.

“It’s definitely been worth it,” she added. “I love it. I’ve finally found something that I want to do.”

And besides, being in school an extra year isn’t all bad.

“I’m only going to need one more year to graduate,” Bearden said. “But that also means one more football season.”